To mount an image

After you mount an image, you can browse the directory of the image. You can review the file and folder structure, and add, edit, or delete files and folders.

To view and modify an image

Committing Changes to an Image

You can commit changes to an image without unmounting the image.

To commit changes to an image

After you modify an image, you must unmount it. If you mounted your image with the default read/write permissions, you can commit your changes. This makes your modifications a permanent part of the image.

To unmount an image

After modifying an image, you can apply the image from a network share or from local media, such as a CD/DVD or a USB flash drive (UFD).

If the DISM commands in this topic fail, try the following:

The utility works in any environment, but the optimal environment is a where you have a local WSUS server and your systems have Windows Update settings configured to “Download updates and do not install” either through Group Policy or local policy.

Due to licensing issues, please download PSExec.exe from the link below and place in the root of the UI folder, otherwise the Install portion will fail
http://technet.microsoft.com/en-us/sysinternals/bb897553 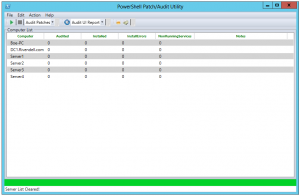 The PowerShell Patch Audit/Installation GUI started out as a project for work to build an interface to perform the patching of our systems to those who were not familiar enough with PowerShell to run a set of scripts I build to perform the same auditing and installation of patches. This product is currently in Alpha as there are some bugs that need to be squashed as well as other features I need to add to the tool as well as updating some some current features.

A blog post about this is available at http://learn-powershell.net/2011/06/03/powershell-patch-auditinstall-gui-poshpaig-released/

What this tool gives you is a way to first audit your systems which you can supply one of many ways. You can supply a list of systems, pull a list from Active Directory or manually add the systems yourself into the utility.

One of the best features about this tool is that it uses background jobs to perform all of the actions while the front end GUI is not affected. This means that you can freely move the GUI around as it does not get locked up like a normal WPF gui would in PowerShell if you attempted to run a job of some kind. You will also notice that the data in the GUI updates automatically as each job finishes for a server. For instance, if you are Auditing for patches, you will start seeing the number of patches waiting to be installed start updating next to each respective server. Same for Installing patches, the total number of installed patches, along with patches that gave an error when installing will be displayed in the GUI’s data window. Also, a progress bar is at the bottom of the GUI and status bar to show you how far along the process is.

After an Audit or Installation is performed, there are options to generate a Grid-View report for viewing or a CSV report can easily be generated to the default location of the GUI in no time!

Next version
The next version will have the following items that I am working on:

Optimize the disk with powershell:

To check the Maximum size and the Minimum size to where a disk can shrink, use the following command:

By default, Windows Server 2008 R2, Windows 7, Windows Server 2008 and Windows Vista enable and use IPv6 as the default protocol. These versions of Windows will normally use IPv6 for all network communication and will step down to IPv4 as necessary.
You may decide to disable Windows IPv6 for several reasons. Perhaps your IPv4 network doesn’t support it, and you want to disable unnecessary protocols. You may have also read that IPv6 breaks Outlook Anywhere on Exchange 2007 Client Access servers.

Most people think that you disable IPv6 by simply unchecking the Internet Protocol Version 6 (TCP/IPv6) checkbox, as shown above. This method disables IPv6 on the particular LAN interface and connection. For other network adapters or connections, users have to repeat the steps to disable IPv6. However, disabling IPv6 this way does not disable IPv6 on tunnel interfaces or the IPv6 loopback interface. It also must be done manually and cannot be instrumented or enforced using Group Policy.

Microsoft wrote KB article 929852 to document how to disable certain Internet Protocol version 6 (IPv6) components in Windows Vista (and later) manually using the registry. At the end of the article, Microsoft helpfully wrote, “Note: Administrators must create an ADMX file in order to expose the settings in step 5 in a Group Policy setting.” Nice. So, I decided to do just that.

Now log into the computer and use the Group Policy Management Console (GPMC) to configure the IPv6 settings. The new policy will be located under Computer Configuration > Policies > Administrative Templates > Network > IPv6 Configuration, as shown below: 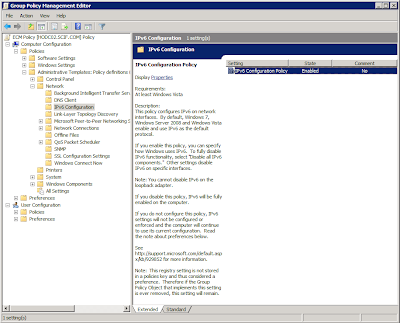 Here, you can configure the following IPv6 settings:

Note that you must restart the computer for the configuration to go into effect.

To disable certain IPv6 components yourself, follow these steps:

Do the following to install Server Administrator on a Server Core. Once installed, you can launch OMSA using a supported remote browser.

During the creation of a new disk, the error “The media is write protected” pops up.

Check if the disk (or volume) is in a read-only state:

If the disk or volume is in a read-only state, clear the attribute with the following command:

Go ahead with the creation of the new disk

A nice article from David Pracht about the reason to disable the wireless connection when your laptop is wired. The source can be found here.

We get questions from customers asking how they can disable a wireless connection when they are connected to a physical network. There can be various reasons for wanting to do this but they are often misguided.

First let me say – Windows does not currently have the ability to disable a Wireless connection when connected to a physical network. There are 3rd party solutions and some hardware will have this ability in the BIOS/Advanced settings of the NIC.

While there are legitimate reasons for doing this, really what you should be asking first is, “why?” What is it you are really trying to accomplish? The answers usually come down to either performance or security.

This usually comes across as something like, “We are concerned that users are connecting over a slower wireless connection when there is a faster physical connection available.”

In reality this should not be an issue as the interface is automatically given a metric when a route is added to the route table and that metric helps decide which route to use if there is more than one path.

Here is a KB article about how XP handles this:

Note: It is done the same way in Vista and Windows 7 but the metric is more granular.

If you are experiencing this type of behavior, you should really be looking closer at the route table and gateway configuration to see if there is an issue there.

There can be times where you have, say, a gigabit network and a wireless N connection that will get the same metric because they essentially report the same speed. If the physical and the wireless network are both on the same subnet and they both have the same gateway Windows can’t determine which interface to use because the metric is the same. So it uses the first one listed in the route table. While you could change the bindings it is not really a good solution and is difficult to automate. You could also change the metric manually with the route command but again this is difficult to automate.

So what if they aren’t in the same subnet? Then it will depend on what is returned via name resolution and the Destination IP address selection process documented here.

This usually sounds something like “We are concerned users will connected to an unmanaged network in the vicinity and expose the physical network to traffic from said network.” In Windows XP this was a more legitimate concern but in Windows Vista and Windows 7 this is not as applicable because of various security improvements but most specifically the strong host model. You can read more about this at the following link:

Further, with Windows Vista and Windows 7, administrators can use Network Permissions in the Wireless GPO to prevent connections to Ad Hoc networks, neighboring networks, or any non-GPO mandated network.

Another concern is just that users will connect to the unmanaged network and send sensitive data over it. The problem with this concern is that all a user has to do is unplug the physical network and they could do the same thing. The truth is that if it is possible to reach the resource over the unmanaged network you can never be sure this won’t happen. You need to either address the routing issue or encrypt the sensitive data. Disabling the wireless NIC is not going to be a complete solution and you could break connectivity in other places that you are not in control of.

So when would you want to disable wireless?

As suggested earlier there are legitimate reasons for wanting to disable the Wireless connection. Perhaps you have a limited number of access points and no ability to expand the wireless side of the network so you want to ensure all physically connected machines use the wired connection. Or maybe your wireless connection only has a limited number of IPs. Again there are other ways to address these issues but if this is the solution you want, 3rd party solutions are currently the best bet.

In a world that is increasingly connected, disabling connectivity is only going to cause you problems down the road. While there are ways to disable a wireless connection when a machine is plugged into a physical network, you should really think more about why you are trying to do this and address the root of the problem instead. If you find that you do still require this functionality, you will want to research the 3rd party software/hardware options available.

Use the following powershell script to display the samaccount, name, mail information from all groupmembers. Also show if the account is enabled.